What to Do About Colombia's Unreached

Jesus saith unto them, My meat is to do the will of him that sent me, and to finish his work. Say not ye, There are yet four months, and then cometh the harvest? behold, I say unto you, Lift up your eyes, and look on the fields; for they are white already to harvest. And he that reapeth receiveth wages, and gathereth fruit unto life eternal: that both he that soweth and he that reapeth may rejoice together. John 4:34–36

Jesus’ disciples were astonished that He was not interested in eating. They wondered who had given Him food to eat in their absence. Jesus’ reply was that His “meat” (as we say, what made Him tick) was to do the Father’s work—to seek and save that which is lost. He then invites His disciples (both past, present, and future) to “lift up your eyes” and behold the harvest. Jesus knew that when we truly behold, this brings change (2 Cor. 3:18).

After six months of traveling in Colombia seeking to ascertain the needs of the 100+ indigenous groups there, we’ve see that the harvest truly is white. We found many different groups with different needs such as:

-Uncontacted Groups (groups with unknown languages that have never heard the Gospel).
-Groups where further research is needed to determine the needs.
-Groups with no/little translation and no church.
-Groups with a few translated passages but no church.
-Groups that need an Old Testament and have no Christian witness.
-Groups that have a translation but no one to teach them by word and deed.
-Each of these categories represents multiple groups and hundreds (even thousands) of souls that have yet to hear and see the Good News of Jesus Christ preached and lived -out among them. Some of these needs require men and women with training to do Bible translation. Others just need dedicated men and women filled with the Spirit and with a determination to go where no man has gone before.

And there are many more needs around the world. As I rubbed shoulders with men and women working in other places around the world this past week, I was touched again with the needs in places like Indonesia, Mexico, Benin, Niger, PNG, and around the globe. These situations are not unique to Colombia. While the groups in Colombia are near to my heart, it’s because that’s the part of the harvest field that my eyes have “beheld.” We do not want to forget the souls in other parts of the world that are heading to a Christ-less eternity—not because they’ve rejected the Good News, but because they’ve never heard.

While the specific needs of each people group vary to some extent, there is one common denominator that is the underlying cause to their unreached status—the lack of laborers. These places are logistical nightmares. They are places of darkness. Places of danger. And places where missionaries aren’t allowed to go. Let’s not forget that all of these barriers have existed in the past and have been overcome by disciples of Christ that were willing to go anywhere the Lord led them. It is still possible!

We were challenged at ABT Camp Week by Brent Bear who shared from the story of Gideon and how those who were not chosen to fight the Midianites were those who stooped to the earth, grasped the earth with their hands, and had their gaze downward instead of upward. He shared this analogy, showing that when our focus is on this world, we are disqualified from fighting in the Lord’s army.

So what can we do?

-Pray, pray, pray (Matthew 9:38). It’s not a cliche. Dr. Robert Miller said, “We are about spiritual work so we must approach it spiritually.” It is the prayer of faith that heals the sick and moves mountains.
-Give sacrificially—time, energy, and resources. Our giving should never be a salve to our conscience; rather it should be a deliberate sacrifice born out of a heart of service.
-Go. The late Billy Graham suggested that Jesus only had two verbs—come, go. Watch a 2.5 min excerpt of his message here - https://www.youtube.com/watch?v=Kc28FE3esHY

May we hear Jesus’ voice as He continues to plea with us to “lift up our eyes,” and may our hearts be touched by the needs of those people groups that are still among the unreached. 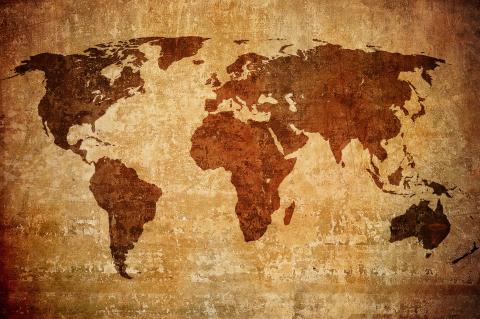