The story of William Tyndale and the English Bible, by Brian H. Edwards

"God’s Outlaw has every ingredient of a thrilling story—a king, a cardinal, secret agents, a betrayer, and a fugitive.

"William Tyndale lived in the colorful and cruel days of Henry VIII, when men were burned, racked, and maimed for lesser crimes that than of smuggling the Bible into England. When Tyndale set out to provide the first printed New Testament in English, he was forced to do so in defiance of the king, the pope, and almost every person in authority. Compelled to flee from his homeland, he continued with his work of translating the Scriptures while slipping from city to city in Germany, Holland, and Belgium in an attempt to avoid the agents who were sent from England to arrest him. His story is one of poverty, danger, and ceaseless labor.

"This fugitive and outlaw gave the English-speaking people their most priceless heritage: the Scriptures in their mother tongue."

—from the back cover

Read this book to find out

I am impressed and sobered by the weight of the burden that Tyndale carried for translating the Bible into the language of his people. Friends, this work matters. Scripture in the mother tongue is an eternal investment, worth giving up a comfortable life and risking life itself.

I commend to you God’s Outlaw as a book well worth your time.


(Don't forget, as a good introduction, you can also listen to The History of the English Bible for free on our website.) 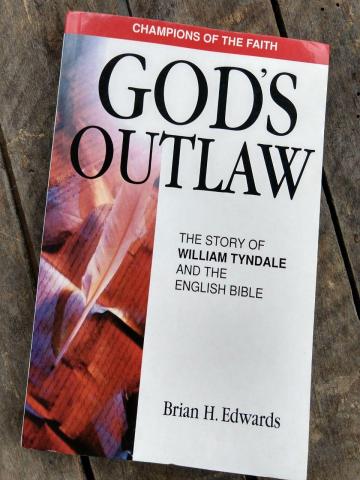