Searching for the Indigenous Church: A Missionary Pilgrimage

A review of the book by Gene Daniels; by Leonard H.

In Searching for the Missionary Church; A Missionary Pilgrimage, Gene Daniels passes on lessons he has learned during years of cross-cultural ministry. For security reasons, Mr. Daniels describes his ministry location only as “Central Asia”. All of the names in the book (even the author’s) have been changed to protect the identity of the characters.

Writing in an allegorical style, Daniels portrays the foreign missionary as a pilgrim on a journey of discovery; a journey to seek out how God has been working in a given area and how the missionary can enter in to His work. Daniels presents this “journey of discovery” in contrast to modern Western evangelical ideas of indigenous church planting. Steeped in the values of intellect and education, Western missionaries too often try to systematize the founding of indigenous churches. Believing they can understand, define, and thereby control everything, these missionaries ascribe to methodologies that “guarantee” an indigenous church if they are followed exactly.

“The indigenous church has become a sort of Holy Grail for many of us,” says Daniels. It is an elusive goal, yet its hoped-for realization is the passion of many a missionary. Because most have never seen anything that could even remotely be called an indigenous church, very few that are seeking it actually know what they are looking for. In spite of this ignorance, many enter the search with confidence, for they are armed with the maps and instructions they were told would lead them to their goal. But their confidence is misplaced.

“An indigenous church, by definition, will be strange and unfamiliar to foreign missionaries,” says Daniels. “In fact, it is often the things that we pilgrims (missionaries) do not like or understand that make something truly indigenous. The well-worn ways of one culture can never speak into the heart of another. The Western culture has many convenient ways to produce just the right spiritual experiences for those from it … I don’t think many of us had even considered that our magic, which never failed to charm us, might not have the same effect on our … friends.”

So how do indigenous churches come into being? Daniels, of course, does not give a formula or methodology for their creation. He acknowledges the futility of this, given the vast differences in cultures across the world. What brought success in one culture is certainly not guaranteed to have similar results in any other culture. Rather, the missionary pilgrim should seek guideposts from God. Daniels shares stories of guideposts that led him toward the indigenous church; often the insights that cultural insiders shared with him. These unexpected and often shocking revelations opened his eyes to how the church should be allowed to flourish in Central Asia. I say “be allowed to flourish” because the missionary is often the one that stifles the growth of the church with his foreign ideas. Daniel shares some stories of how foreign pressures stifled the growth of the indigenous church, one of which is summarized below.

A group of missionaries from several different countries met with the united desire to see a truly indigenous church planted in a strongly Islamic quarter of a Central Asian city. The group spent much time in prayer, and saw quick and exciting results. Soon a band of former Muslims was worshipping God within earshot of the most famous mosque in the land. The young church was so successful that word began to spread. Soon mission leaders came visiting and were duly impressed by the truly indigenous nature of the church. They decided it would be an ideal location for future missionaries and a few key supporters to gain exposure to a “real” indigenous church. As the number of groups passing through increased, structure was needed to handle them. Before long, the needs of the Western visitors were being prioritized above the needs of the little local church. After a few short years, there was a great deal of structure and administration about the place, but very little indigenous church.

Is Daniels implying that foreign missionaries always do more harm than good or are completely unnecessary? Certainly not. Jesus commanded His disciples to teach the Word to all nations. Acknowledging poor examples of missionary work does not mean we should abandon it. Rather, Daniels encourages humility in the missionary effort. Though missionaries may be schooled in the scriptures and have years of experience following Jesus, they have much to learn from the culture they are entering and the new Christians that God raises up there. The missionary must recognize that his norms for worship will feel foreign to these new Christians; possibly due to the foreignness of the Gospel, but probably more frequently because they are flavored by a foreign culture. The missionary should be willing to feel foreign in the indigenous church rather than imposing his norms and making the new Christians feel uncomfortable in their own church. And lastly, the missionary must be willing to leave the field when he is no longer needed. There will come a time, perhaps sooner than the missionary expects, when his presence in the indigenous church is more hindrance than help. Recognizing this and stepping back is the final skill that indigenous church planting requires.

“What does the indigenous church look like?” asks Daniels at the end of the book. “I did not need to write a book on the subject. It has already been described quite well. In the first century, an old man had a vision while exiled on an island off the coast of Turkey.

I saw the Holy City, the new Jerusalem, coming down out of heaven from God, prepared as a bride beautifully dressed for her husband. And I heard a loud voice from the throne saying, ‘Now the dwelling of God is with men, and he will live with them. They will be his people, and God himself will be with them and be their God.’

If that’s not the answer you were looking for, if you wanted something more realistic and concrete, may I make a suggestion? First, put your books, degrees, and fine teaching robes in storage – you may need them someday, but not on this journey. Then, adorn yourself in the humble cloak of a pilgrim; it holds your best hope of someday arriving at the destination you so desire. And if you must carry a bag, keep it light. It makes gathering real treasures all the easier.”

Note: You can order the book on Amazon.com. 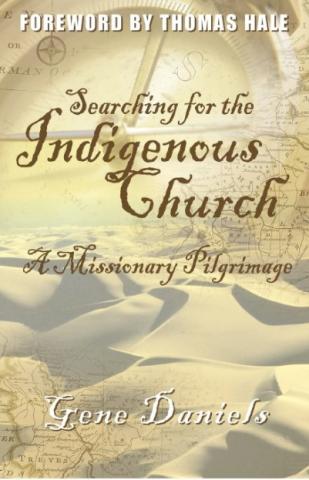