Several ABT members recently read this book and responded to three questions:

Question #1: Why did Garrison write the book Church Planting Movements?

Response #1: David Garrison wanted to record what God is doing in large-scale, fast-spreading movements around the globe, where churches are being planted by the hundreds per year and souls brought in to the Kingdom by the thousands per year. His goal in this is that others be motivated to pursue greater visions and learn what it takes to unleash a movement of God of these proportions. Especially, that those doing evangelism and church planting among unevangelized peoples would catch this vision—and learn to ask not just, “What can I do to use my gifts?” but, “What will it take to unleash a church planting movement here?”

Question #2: From what you now know about church planting movements, what do you think of them?

Response #1: Most of the movements recorded in this book appear to be genuine, effective, and of God. None is perfect, of course (as if I would be qualified to judge them!). For instance, Chapter 7 about the Muslim world includes significant factors which I believe carry within them the death sentence of the movement. Extremely dangerous tactics because they are not aligned with God’s revealed will, such as Muslim-friendly Bible versions, Christians who call themselves Muslim, and using the Koran to teach God’s truth. Movements like in the Americas with big leaders at the top tend to corrupt or derail from the way of faithfulness eventually. Nevertheless, I do believe a tremendous amount of Kingdom growth has happened in most, if not all, of the church planting movements mentioned.

Response #2: This seems to be the fastest way to spread the Gospel. I see one precaution. We number-focused Americans can look at numbers and forget to look at the “spiritual depth” of the movement. The factors of accountability to others and an authoritative view of Scripture are a must or the movement will go off-key. I truly see meeting in homes with small groups as an amazing discipleship tool. Personally I have been involved in a men’s accountability group and I love it. In conclusion, it can obviously work based on the examples. Although care must be taken that accountability and an authoritative view of God’s Word are intertwined.

Question #3: How will having read this book impact your life and ministry?

Response #1: I think I’ll want to keep the book close by to check in with now and then. I think if I’ve been convinced of anything it was the necessity of sustained prayer. I must admit I don’t currently spend anywhere near 2 hours a day praying. And definitely the advantages of small house churches over large buildings/groups has been reinforced to me as an approach to church planting.

Response #2: I would love to see a church planting movement blossom from the community I serve to other communities. To make this happen I need to keep myself out of the driver's seat. If anything stops a church planting movement in my ministry it is going to be me by thinking I need to help make all the decisions or take too much control. I also realize I need to push myself to abundant evangelism in my life today if I hope to do it in another part of the world.

Response #3: I want to keep central in my vision and mode of operation the 10 factors present in all church planting movements, and avoid the 7 blockades. Reading this book added fuel to the fire of my conviction in these areas.

View or purchase the book at Amazon.com 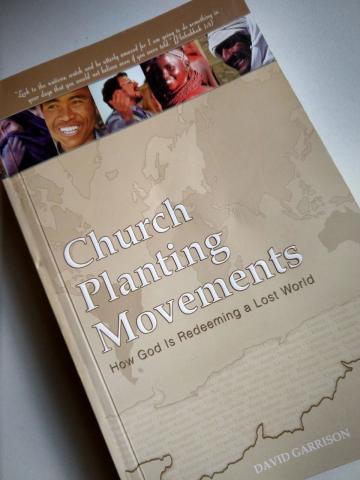