The rainy season is just starting in our town, bringing cool showers and relief from the stifling humidity of April and May. With the start of the rains also comes a certain responsibility for the comisario (mayor) of the town. Accompanied by village elders and a marching band of drums, trumpets, and tuba, the comisario makes a yearly trek to the “house of the rain” on a hill overlooking the town. There he performs ceremonies to ensure that the year’s rains are adequate for a good corn crop, but not so strong as to cause landslides and flash floods. The ceremonies are believed to influence the following season’s weather. To prove their effectiveness, the townspeople tell about when the comisario did not perform the ceremonies in 2013 and the result was a year of unusually strong thunderstorms and torrential rains. Since then, the comisario has been all the more careful to do his duty.

This belief that the rains are controlled by a spirit or spirits that can be manipulated by human-performed ceremony is a classic example of animism.

Many of the world’s unreached people groups have some form of animism as the main component of their religion. Animism is difficult to define, as it does not refer to a specific doctrine or creed, but rather a range of beliefs and resulting practices. In his book Communicating Christ in Animistic Contexts, Gailyn Van Rheenen describes animism as “the belief that personal spiritual beings and impersonal spiritual forces have power over human affairs and, consequently, that human beings must discover what beings and forces are influencing them in order to determine future action and, frequently, to manipulate their power” (Rheenen, 1991). The range of religious activities that this belief in “personal spiritual beings” and “impersonal spiritual forces” gives rise to is enormous. In some future posts we may look at how animism is manifested in certain cultures, but today we’ll briefly discuss how important it is for missionaries to animistic groups to have at least a basic understanding of it.

I expect that nearly everyone reading this post lives surrounded by a secular society such as the United States or Canada. Secular societies believe that spiritual beings and powers are nonexistent and that reality is limited to only what we can see, feel and understand. As Christians, we are theists, believing in a sovereign God that allows His people a good deal of free choice, but, influenced by the culture surrounding us, we tend to minimize the influence that any power apart from God has on our daily lives. We read the Bible through lenses tinted by the secular culture around us. We don’t doubt the stories about Jesus and His disciples expelling evil spirits, but we rarely see this as being directly relevant to us today. Indeed, some western theologians have even speculated that personal spiritual powers used to exist but their dispensation ended since Jesus’ day.

In contrast, cultures with high levels of animistic beliefs are very conscious of spirits and powers around them (whether real or perceived) which affect their daily lives. To the animist, nothing is random, and people have no or very little free choice. Instead, the spirits control what happens and, in order to survive and thrive, humans must do what they can to manipulate these spirits through shamans, by offering sacrifices, or by performing ceremonies. When people from animistic contexts come to a belief in the true God, they rarely reject as nonexistent the spirit world they formerly manipulated. Yes, God is more powerful than those spirits and powers, but God’s power must be invoked to rebuke the spirits rather than using the old manipulatory methods. For these Christians, the stories of Jesus casting out demons feel quite relevant.

My point here is not to pass judgement on either secular cultures and animistic cultures and say which one is closer to accurate. I believe both possess error that is corrected by Biblical teaching, and perhaps each possesses truth that the other is lacking. Rather, my point is that the vastly different views of the spirit world which these two types of cultures hold can easily result in confusion and misunderstanding when people from a secular-type culture interact with those from a animistic-type culture. This is true even if both parties are Christians. I come from the United States and have been influenced by its secular culture. I live among a people that are animistic; a few are Christians. . .most are not. Those who are not Christians live in fear of whirlwinds and thunderstorms, rainbows and pretty yellow birds. Those who are Christians emphasize the power of Jesus over disease and life and death. Neither the fears of the non-Christians or the emphasis of the Christians is something I was used to previously.

It is important for me to understand as well as possible the animistic or animism-influenced worldview of my friends. Back in the States, I could assume that most people with whom I read the Bible would reach an equal or very similar understanding of the story or teaching under consideration. Here I cannot make that assumption. Whether I’m considering Bible teaching with a Christian or non-Christian, we may very easily differ on what the main point of a particular passage is. In the case of the Christian, it is possible that God’s Spirit has revealed truth to him that has been previously hidden to me. In the case of the non-Christian, he may be misunderstanding the nature of God and God’s creation and needs special teaching to correct an error in worldview. In either case I must understand their worldview, or else I will be confused by their responses and incapable of either learning or instructing.

For me and my colleagues, understanding animism is not an interesting intellectual exercise, it is important to successfully communicating Bible truth to the lost souls around us. 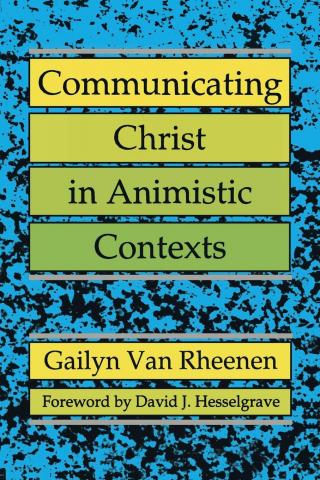