Conversation with the Goat Man's Mother

Join me up here on the hill behind our little adobe house, and we’ll look out over the bowl that is our village. The sun is just about to set, and the mountains have an orange, hazy glow about them, which mixes with the smoke from dozens of evening cooking fires. I call it the Golden Hour. In the far distance we can see some trails heading up over the mountains, toward fields that may be as far as a two-hour hike away. The branches of a mango tree spread out above us, loaded with sour green mangos ready to be plucked by dirty little hands and eaten with salt. Below us is the Goat Man’s house, and beside it is his goat pen. The Goat Man’s elderly mother is beside the pen, hurling rocks at an unruly goat and hollering something that shouldn’t be repeated. She’s a spicy lady, and children and animals are the usual recipients of her ire. She always has a nice smile for me when we get back to the village after a weekend away. “You arrived again.” she’ll say. “Yes, we arrived again.” I’ll reply. I don’t know her name, and I haven’t asked, since you can know someone an awfully long time without ever knowing their name.

The goats are mostly settled in the pen now, and my thoughts turn to our relationship with the Goat Man. A year ago at a village meeting he proposed that we should be forced to leave town. Just last month, however, at another village meeting, he was the one who redirected the conversation when the same topic came up, signaling that he was no longer in favor of driving us out. He has been a good neighbor, honestly. It’s not the first time the Lord has moved us in beside someone like him, perhaps in order to give us a chance at friendship.

Down at the goat pen, his mother keeps squinting up at me, to the point that I’m beginning to think she doesn’t like me sitting here. But no, she’s coming up to join me. Listen in…

“Are you sitting here?”

“The ground is very hard.”

Preliminaries over, we chat about many different things. She asks me if I know of any good medicines for her eyes, because she can’t see very well any more. We discuss eyes a little, then move on to other topics. I ask how many children she has, and she asks whether we want to have more children; and if so, how many? Two of her children died as infants, which is less than the average among her generation. She is fortunate, she says, to have so many children still living. Then we talk about childbirth and midwives, and the fact that there is only one older woman left in the village who knows traditional midwifery, and she can’t see well enough to practice anymore.

“Now everyone goes to the hospital to have their babies,” she says. “Before, all of the babies were born at home with midwives. The midwives knew how to rub our bellies so that the baby would come down and be born; but now the doctors say we don’t need to do that–-the baby will come down on its own.”

She asks me (again) why we are here. And aren’t we ever going back to our town? We discuss visas, cars and air-planes, animals, jobs, and tortillas. She coughs a lot during the course of our conversation: decades of smoky fires and moldy houses have not been friendly to her lungs. Yet as she rises to go, I’m amazed at how spry she is for her age. She slowly begins to wander away without saying goodbye, and I say “I’m going now”. “Eh” she replies.

It was a nice conversation; a pleasant surprise to have the Goat Man's mother join me here on the hillside. There’s just one thought I can’t get out of my mind:

“Lord, did we get here in time for her?” 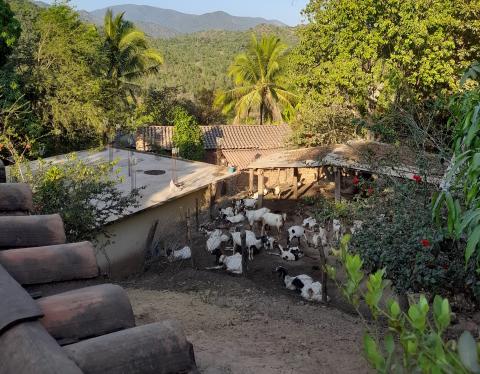 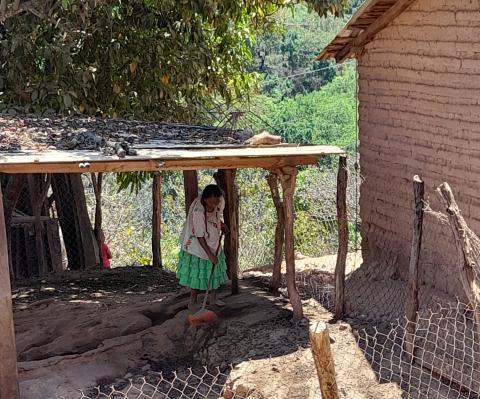