Death in a Mixtec Village

Yesterday we went to the visitation of a sixteen-year-old boy. We took along a case of Pepsi as a gift to the family, according to the custom of the village. Other people brought Pepsi as well, or flowers and candles to place around the corpse.

As we entered the small, one-room house, we were invited to sit down with a few of the family who were gathered. We asked about the boy– when he died, and what he died from. They replied that he had died suddenly, and that he had died from a sickness. What sickness? They didn’t know.

Two of the village men present are helpers in the Catholic church, and they soon sat down next to the shrouded corpse and began to read Catholic prayers. “Mary, Mother of God, hear us. Look on us with mercy, and help us. May our sins be forgiven...” On and on they droned, vain repetitions that reached no higher than the roof tiles. The feeling of despair hung heavy in the room. The smell of death was faint in the air. The only signs of grief were the weary faces of the mother and sister, and eyes that had been crying.

One of the elderly men making small talk with us was the boy’s grandfather. He is the most respected (or feared) shaman in the village, and according to local gossip, this has led to the untimely deaths of five or six of his children, and now his grandson.

A bit later the mom offered us some beans and tortillas to eat. As is the custom, the family of the deceased prepares food for everyone that visits, and also gives them Pepsi to drink. We ate and soon left, wishing for a way to comfort a family without Hope. They don’t hug, so a sympathetic look and some murmured words of sympathy were all that we could leave with them… along with our prayers.

Later in the afternoon, I hauled the casket to the graveyard in his truck. Accompanying me were the family and a few relatives and elderly women who carried flowers. The men were drunk and silly, numbing their senses with cerveza (beer).

A few more prayers were recited over the open grave, a handful of water tossed in on top of the casket, and the grave was filled. Another soul has passed into eternity, and our hearts are heavy.

We have since been asked by several people, “Why did the boy die?” We are regarded as powerful white people and “religious”, so surely we would know what malicious spirit or spiteful person caused the death.

A few months ago another young boy died in the village, and his family killed the man they suspected of working sorcery on him. We pray that a similar scenario is not repeated with this death, but rather that God would use it in some way for His glory.

________________
We joyfully welcomed our baby daughter into our family in September. “It’s good,” they tell us, “another little girl to help make tortillas and wash clothes!"

We are excited to have started translating the book of Luke into Yoloxochitl Mixtec. It’s a challenge and a joy to see the Word of God come alive in another language! One ongoing and very great need is for translation helpers. We dream of a team of mother-tongue translators catching the vision and taking up the work, but the reality is that we have only had language help maybe 5% of the time over the last three years. It looks impossible, but what is impossible with men is possible with God! Please join us in praying for helpers as the Lord lays it on your heart.

—the Wagoners of Mexico 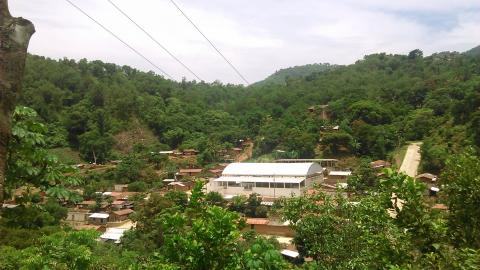