(written the beginning of August)

Greetings in Jesus' High and Mighty Name from the Summer Institute of Linguistics at the University of North Dakota in Grand Forks. We have been experiencing the intense learning, the good fellowship, the broadening of perspective, and the constant lack of sleep that SIL has been offering us the last 8 weeks. Yes, we are actually at the end of Week 8 now and only have one more week left. It's rather hard to believe that we have been out here for nearly two months now. But throughout our time here, God's grace has been ever present and He has certainly kept his promise, "My grace is sufficient for you, for My strength is made perfect in weakness." (2 Cor. 12:9 NKJV)

I've been asked to give you an update concerning our summer here at SIL, as well as recent ABT-related events.

In April and May, our family made plans to attend ABT Orientation Weekend and the Camp Week that followed. However, God made some adjustments to our plans via a needed surgery for our infant son. So we ended up being in State College only for the Orientation Weekend; our time there was so enriching! We came home from PA on May 20th, and on May 21st, we took our son to Indianapolis for a small surgery on his urinary tract. Thankfully, he recovered quickly from that surgery and we were soon home again.

A little less than two weeks later, we were on the road again, this time heading to the Red River Valley of North Dakota for our summer at SIL. My sister also came out to SIL to be a part of the Childcare Team—with a specific interest in taking care of her nephew. She has been a tremendous help and blessing to us as we study out here.

We were a little worried about how our son would adjust to life here at SIL. We also wondered, with his track record, if he would stay out of the hospital during our time here. But praise the Lord, he has done quite well here!

I am taking the entirety of Package A, which contains the following:
• Learner-Directed Second-Language Acquisition
• Articulatory Phonetics
• Introduction to Sociolinguistics
• Syntax and Morphology

My wife is taking only two classes: Second Language Acquisition, and Articulatory Phonetics. We have both been enjoying our studies very much. In Articulatory Phonetics, it has been so interesting to learn to form the many, many speech sounds used throughout the languages of the world. Also, we have enjoyed learning some Dutch Sign Language as part of our Second Language Acquisition course.

Besides classes, we enjoy our everyday interactions with the staff and our fellow students, many of whom serve in various parts of the world and bring with them a wealth of experience that we have opportunity to glean from. Overall, we are thankful that we had the privilege of coming here to study.

We have also been blessed to be able to study here this summer with many fellow ABT-ers. ABT is represented in Packages A and B, and also in the advanced courses. Package B consists of the following:
• Phonology (introduction to the analysis of the sound systems of spoken languages)
• Field Methods (practical aspects of linguistic fieldwork and analysis)
• Media Technology for Linguistic Research
• Ethnographic Methods (methods for collecting cultural data)

There are about 30 ABT-associated people out here, including children. We have especially enjoyed getting together with them on Sundays to worship and study the Word together. Three of the ABT families are living off-campus, so sometimes we have church at one of their places. Other times we have it at a nearby park.

Thank you all for praying for us! I hope this has given you a glimpse into our lives this summer.

RB is from Indiana and is training to be a New Testament translator. 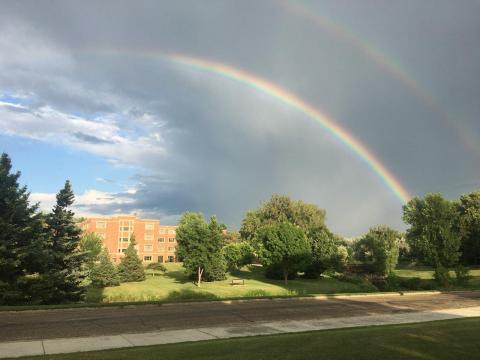